The Electric Version - The New Pornographers

Today I downloaded and installed Firefox 3.0.
It’s very exciting! Once again, the good folks at Mozilla have beat the pants off of Microsoft’s latest offering: IE 8 (still in Beta testing). Firefox 3 was released on… Tuesday, I believe. I downloaded it just a few days ago and I’m pretty impressed with it.

The design was polished up a little bit, and it runs a lot faster than it has in the past, which is nice. It probably runs even better on people with cutting-edge machines, but even on my little ol’ 2.8 ghz Pentium 4, it’s not terribly shabby. However, I had a few gripes that I wanted to tweak with it:

1.) Minimize to Tray Didn’t Work-
OK, so maybe I’m crazy. In fact, I’m fairly positive I’m nuts in my love (need?) of this tiny little extension. All it does is when you click the [X] box to close the window, instead of quitting the program, it goes to live in the little system tray with the clock! 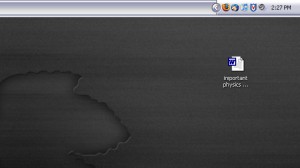 See it there? Now it’s out of the task bar (the bit in the middle where minimized things go), but it isn’t off. My biggest gripe about Firefox is that it takes a while to load up, and this fixes that becuase I never have to shut it off, but I can get it out of the way! As you can see, I have the same extension installed for Thunderbird, and there’s even similar functionality built into iTunes!

The problem is, this little tool doesn’t work with Firefox 3 becuase for whatever reason, the developers haven’t updated it. In truth, it still works, as in functions, but the application won’t let you install it, because there’s a built-in limit to the highest version it could be installed on! This is put there so that they can maintain control over which versions you use it with, so that people don’t install it in unsupported versions and whine when it doesn’t function like it should.

However, that’s exactly what I wanted to do! Since this extension has such a small, simple function, I’m not really worried about it breaking, so the only problem was to remove the version limitation. This is amazingly easy.

I usually only need this hack for Minimize to Tray, but theoretically you can use this for anything. However, do so at your own risk, becuase on more sophisticated add-ons you are less likely to be able to get away with using an antiquated program with newer version.

2.) Tab Mix Plus Didn’t Work-
One of the most popular add-ons for Firefox, somehow, didn’t get updated for the version switch. You can download a developer build from their website which works just fine. No clue as to why this isn’t the version available in the add-on repository…

3.) I Don’t Like That Stupid Star-
Supposedly the little star makes it easier to bookmark things. Personally, I’m not really huge on bookmarks any more. I use them not for things I frequently visit, but for sites I infrequently visit, but don’t want to forget about. Thus, having that little star in the bar all the time is a little irritating to me. It’s pretty easy to get rid of though, so that’s good.

When you’ve restarted Firefox, that stupid little button should be gone! Hooray!

4.) Secure Websites Aren’t Yellow Anymore-
I actually stumbled across this while researching something for this entry: they changed the code from FF2 that made the address bar yellow for a secure (encrypted) website. I actually kindof liked that, thinking back on it, and so I went ahead with the fix. As above, it’s just a simple edit to your Chrome file. Paste the following into your userChrome.css file:

Save, and that’s that!

5.) The Smart Location Bar Irritates Me-
I don’t like it. It’s big, and it’s ugly, and it uses a creepy algorithm that finds websites I looked at like… years ago… and slaps them up in this giant green nasty font. I’m sure it’s cool for some people, but if I want to search, I use Google. It’s my homepage. Done. I don’t use the browser itself to execute a search function. Thus, when I type in the address bar, I know exactly where I’m going, and these gigantic green suggestions do not help me in the slightest.

There’s two options for fixing this:

I’ve said it time and time again: “I’m like an elderly person. I like things they way I like them.” My browser is no exception; in fact it is the quintessential embodiment of this principal. So yeah, I spent the past two days whipping my browser back into shape, and at the end of it all, I’m really pleased about it.

A new feature I’m using is the “search for text when I type” feature. I don’t honestly know if it’s knew or not, but it is to me: Options->Advanced->General is where you can find this. On any given page full of text, if you’re not clicked inside a form (box for typing) and you start typing, it activates a tiny little QuickSearch bar to find what you typed. Click the page, and it disappears! I thought this was so cool, since I’d been using the old ‘CTRL+F’ shortcut to bring up the ‘Find’ toolbar for years now.

But that’s basically what I’ve got to say about Firefox 3. It’s open source and amazing. The browser I’ve come to love and take great, great pride in these past few years continues to improve and get better. The real beauty of it is that you can hack it to pieces and build it back up to make it JUST the way you want it, and I couldn’t be more pleased!

At the bottom here, a few more updates:
Sadly, there’ll be no radio show this summer! The equipment is all deconstructed and in the process of being moved, so I won’t be back on the air until August! Oh well. Maybe this give me time to finally get the archives up-to-date, and work on that much-lauded podcast. We shall see.

I will probably be working that into what I’m temporarily dubbing our 2.5 version.
Features, as mentioned before:

-Smaller-bandwidth navigation images (plus I need to get rid of the border that appears around them when clicked… thanks for that, Firefox 3)
-New banner set
-Feeds that display the date
-Radio page will have podcast capabilities (hopefully iTunes compatible)
-SnapShots? I still can’t decide on these things. I make up my mind to hate them, and then I come across some website where they’re really useful. Probably not, but maybe.

That should be about it. My other tech-related endeavor is getting Thunderbird set up as an RSS reader, a la Google Reader, which Ethan continually lauds. I want to see if open-source can compete with similar functionality. News on that later though.

[One final thing, becuase this just made me laugh so hard… Have you ever heard of the ‘uncanny valley’?]