It’s been a rough week. And it is only Thursday.

On Monday I was just poking around the internet, reading some stuff about Radiohead, and I stumbled across this:

It is the music video for the single “Pyramid Song” off of “AMNESIAC”.
I really like the way they did this, despite it being the exact opposite imagery that I had in my head when I listened to that song on my own (fire, river Styx, hella explosions everywhere but totally muted ’cause they’re so far away… that kinda thing). Watch it, it’s neat.

Speaking of neat things, did you know there is a Watered-Down-Wikipedia? It is called the “Simple English Wikipedia,” and it seems to be written for kids and people who don’t speak a lot of English. My initial reaction was “How incredibly dumb. What use does that have?” Well, the English one does squat for me when I can understand full and well the fully-fledged one. However, I had the idea to check the German one.

Which I understand almost.
Which made me shut up and realize the value that it has.

So I’ve been poking around on that, trying to hone my language skills auf Deutsch. It’s been kinda fun. I suggest you check out your language of choice and give it a spin. Es ist spass.

Most of the remainder of this deals with Evangelion comments I have.

I kinda forgot about EVA for a few months there. Which is cool, because nothing’s really been happening. However, I got to wondering about it today and decided to check up on it. As near as I can tell, there is no good cut of the small preview for Rebuild 2.0. The best I’ve seen are fans who’ve seen it, and approximate what they saw with old footage from the series and stills from released production work for the new stuff.

Below is a set I dug up from some blog, and I wanted to offer some comments or speculation. 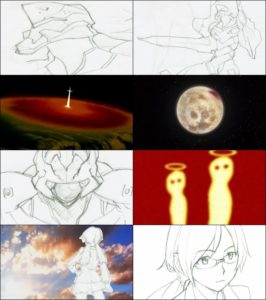 The top two frames deal, I believe, directly with Unit 05. This is one of the promised “New Mechs” we’ve heard were coming. So far, it’s been described as “provisional”. I have no clue how to interpret that. Did they just scrap it together after Unit 04 is lost and Unit 03 is destroyed by Ikari? I don’t know. Hopefully we’ll get a little more to go on than that. And the question also remains: who’s piloting it? I’ve also seen it identified as 06 in some YouTube trailers, but the description I read stated that it was the one with “extended arms”, which fits that picture pretty well.

According to what I’ve found, the other Eva and it’s pilot come from the Moon. Which is pretty wild. To give some context, apparently 1.0 ends with SELEE meeting with Kaworu on their lunar base. I wasn’t aware they even had one, but I’ll roll with it. It will certainly change the dynamic in episode 22 where Rei throws the Lance into orbit to kill Arael. It eventually lands on the Moon, which really angered SELEE in the series because they had no way of retrieving it. Maybe this will be a non-issue now that they have a base up there…

In any case. To the focus: Eva 06 (I believe pictured in the third row, left) and it’s pilot (bottom row) will come from the Moon (pictured with blood all over… which is curious, but not all that surprising, given Eva…) and land on the Earth (depicted as a cross-shaped explosion). How or why they were up there in the first place still remains to be seen.

However, I’m for it. They had to tred very carefully in making this so as to not disturb many of the original elements. (It’s interesting how well some things match up though. In the aforementioned episode 22, Hyuga mentions that the parts for partially-constructed Units 05 and 06, the ones which feature in this new segment, were scrapped to repair Units 00 and 02. Huh. I guess NERV is less thrifty in this new version) But I’m a huge fan of the lunar base. EVA in space sounds pretty rockin’ to me.

Oh! I almost forgot. The little blob-dudes are “ADAM” according to the trailer. More than one of him? I don’t know… this is all pretty crazy. Good of them to expand on Adam/Lilith though. That part always was a bit sketchy, despite numerous iterations in media and fan-formed-theories to explain them.

If you can’t tell, I’m already getting WAY excited about this, despite probably having to wait another few years before it makes its way over to the United States. It will eventually though, and it’s fun to follow this from its formative stages.

I think that’s it.

So, not much else for today. I need to get some sleep, because tomorrow is the grand finale of Demo Thursdays for Sami’s class!

P.S.: How about that thrashout at the end of My Iron Lung? I like the first half of the song a lot better, but I feel like the second half getting all crazy is a nice counterpoint to offset the calm of the opening. Just a thought.