So I’ve been sitting on some pretty crazy stuff since I last blogged.
In truth, it’s just a bunch of random (pretty funny) things that have happened in the past few days, with actual news at the bottom. So here we go:

I’m a big fan of the Nintendo DS platform… or at least as much as I can be without actually owning one. Lizz has one, and on it she has one of the ‘Nintendogs’ games. These are pretty fun, becuase you kinda take care of stuff and so if you’re into nurturing or whatever, it’s a game for that.

There’ve been several spin-offs for horses, cats, whatever.
But this just crosses the line (CAUTION: The noises on that site are really loud; I had headphones on and nearly went deaf).
But for real: how messed up is that? Virtual Child-Rearing? From the looks of it, you feed them, wash them, change them, dress them, and so on. I just don’t see the market for such a game. Also: The babies all have E.T. faces.

You also seem them naked at one point, only to find that they are simply anatomically incorrect, described by this IGN review as akin to a naked Barbie Doll.

So yeah. All kinds of strange.

Speaking of strange, I’m going to drop the quote of the week on you guys:

The application is called Spark, and its with the Social Profile thing. Actually I think this random girl from high school was number two […]. Facebook wants me to play for the other team, how embarrassing! Anyway.

First: ‘Play for the other team’ is the BEST euphemism for being gay I have ever heard.
Second: This ‘spark’ application intrigued me, so I gave it a spin on the ol’ Facebook.

It is TERRIBLE.
The statistical run down says it all:

You are more desirable
than 76.16% of people
Another 189,423 people are at your level
Your global desirability ranking is 14,445 out of 26,401,177 people
Last week: You were viewed 2 times and no people expressed interested in you

Wow. That has to be one of the more disgusting ideas I’ve ever come across. An application custom tailored to make you feel better/worse about yourself based entirely on how many clicks you get from these (pardon me if I’m talking about you…) sick people who have nothing better to do than to sit around and think to themselves, “I would/would not hit that!” and click the corresponding link.

That’s just… wow. Also, the numbers are staggering to look at. With 28% positive, I am more desirable than 76% of the other people? That’s insane. Especially when you consider the fact that people see THIS: 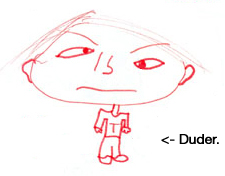 I mean… wow.
What a world we live in.

Speaking of Facebook, in an effort to get more people over here reading the ol’ blog, I’ve installed a little application called Wordbook on both Facebook and WordPress. This just syndicates all blog posts here on my Facebook page, and hopefully people see it in the news feed as well.

I’m not really into Facebook or whatever, but a lot of people are super-into it, and on it all the time, so I figured I’d take a little stab at publicity and see if we can’t get more people stopping by the blog. This new syndication outlet is part of what you could call a small ‘Point Release’ of Schödinger’s Blog. Version 2.1 includes now not only this Wordbook outlet, but I also upgraded to the brand-spanking-new WordPress 2.5. It’s pretty fancy. They overhauled the interface, added a lot of new media features (which I used to insert the images in this post; I’m not sure if I’ll use it for everything from now on or not though), and made it more secure.

I also decided that Schödinger’s Blog is probably due for a major upgrade in the coming months. I’m shooting for this summer (before or around our two-year mark in August) as a good time to make some changes for what I’m tentatively calling Version 2.5. Feature list right now is short, but like I said, I’m still in the formative stages:

So those are the ideas I have right now.
We’ll see how well they pan out in the next few months.

On a final computer/upgrade note I downloaded the fourth beat release of Firefox 3. It was pretty cool. They’ve tinkered with the interface a bit, and made it quite a bit faster. However, none of my extensions worked that well with it, and I use those a lot more than I thought I did, so I downgraded back to 2.0.0.13. While I was doing that though, I got some new extensions, which I can recommend:

-FireFTP, which lets you run FTP from a plain old tab
-Download Status Bar, which gets that pesky download manager condensed into a little progress bar at the bottom of the screen

I dunno. I’m into webrowsers.
What can I say.

There’s actually more things to talk about, but I figured, why not leave them for next week.
It’ll give the illusion that I’m posting more consistently.

On one final note, I had some time tonight, and so I also posted our second radio show.
If you missed parts or all of either, please check out radio.schrodingersblog.com and get caught up!

[The show still lacks a name. I need to get on that!]