Lots of things going on here!
I have so much classwork, it is absurd, but I wanted to drop a line in on the ol’ Blog.

Emily posted this a few weeks ago, and I finally got around to watching it.
Remember (high school people) how I forced everyone to watch Troll 2 at one point or another? (Also: Shout out to the Sion kids who introduced ME to it) It seems I was not the only one who became quasi-obsessed with it:

“You Can’t Piss On Hospitality,” still remains, even to this day, the greatest line ever spoken in cinema history. So check out the documentary if you’ve seen Troll 2.

If you haven’t seen Troll 2, send me an e-mail, and we’ll figure something out.
Speaking of other silly things I forced on people back in high school, remember eat poop you cat?!
Now you can play online.

Ian and I were reading the news when we came across a news story concerning Jessica Simpson. She went to the hospital for something so… whatever. However, closer inspection revealed it to be another classic proof of what I’m quickly terming Noble’s Law:

Despite the noteworthiness, importance, or stature of any item of interest on the internet, the comments will always be more entertaining. 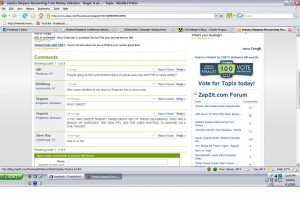 I will try to post more examples of Noble’s Law in the future.

Ian and I are also avid fan’s of Howie Mandel’s Deal or No Deal program. Or at least we the online flash game. A lot. Probability dictated that about 26 games later, this would be bound to happen, and reality followed suit:

Another fun thing I was referred to not just by Ethan, but by WordPress, is Stuff White People Like. This blog is essentially the tell-all of the upper echelon of mod-hipster-indie-types. The frequency with which I come across a given article that perfectly describes either myself or someone I closely associate with is… disturbing.

On a final note:
Humans vs. Zombies has started. The outbreak is here, in Kirksville, and no one is safe.
(Least of all me since I smashed my foot into my desk and occasionally pick up a little limp.)
Expect the next few blogs to be largely zombie-oriented with crazier music than usual if I manage to survive long enough to type them. If I don’t, except a full account of my tragic death, and perhaps a summary of my zombie exploits following the game.