I posted a little while ago that Boston’s Best Music Poll Concert had gotten me really excited to investigate a handful of artists. True to this, I caved the next weekend and picked up Metric’s Fantasies and Passion Pit’s Manners, the latter of which I nabbed for 8 bucks at Newbury Comics on Harvard Square, which was too good of a deal to pass up!

I’m gonna go with Metric’s album first, because that’s how they line up, lonely in my iTunes library (all my music is on my desktop, and so there are only about 3 CDs on my laptop!). It’s easy enough to just come out with it: this is a really well-crafted album. In their element, Metric’s electro-pop-girl-crooner bit works pretty well. Naked, the tracks might get a little dull and boring, but with the subtle beats behind them, the record goes pretty fast. ‘Help, I’m Alive’ is a perfect opening track, with all the tenants of a good single that get you excited to hear the rest of the record.

Normally, if you know my typical gripes, you know that I hate it when artists front-load their better material at the top of a record, and putting the single first is certainly an indicator of that; particularly when it is followed by the equally driving ‘Sick Muse‘. Imagine my surprise when I found two of the album’s best tracks, ‘Gold Gun Girls’ (which I posted an acoustic of from the BMP concert) and ‘Gimmie Sympathy’ back-to-back dead-center of the record! Both tracks are good in their own right, but they are a pretty powerful twosome that mark the peak of the record.

The last three tracks blend a little together for me, but I never get bored or irritated enough to turn them off. I think that’s because even at their most mellow, anything on Fantasies can get you bobbing your head or tapping your foot, which is one of the highest complements I can give the record. My favorite track I found that I hadn’t heard before purchasing it is easily ‘Collect Call‘ with it’s slow build to a pretty dance-able chorus. 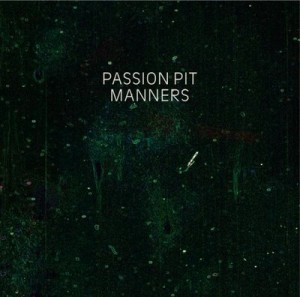 Next up is Manners! I also saw Passion Pit live, and against my better judgment that normally I do not warm up quite so well to the typical “indie-darling” group, decided to give their outlandish brand of electronic-aural-landscaping a go. I was not disappointed! This is some fantastic work right here, and they really do deserve a good chunk of the hype they’ve been getting on the blog circuit in the past few months.

Maybe the most fun about this record is that it’s hard for me to describe. I won’t go so far as to say it is genre-defining, but it certainly is different from the vast majority of my library. I’m happy to say that I eventually came around on ‘Sleepyhead’, which I really do enjoy in earnest now; it’s synthetic somehow-organized cacophony is masterfully executed. As before, ‘Little Secrets’ is still an explosive track everyone should hear.

What is most surprising about parts of this record is how clean-shaven it sounds in some places. ‘Let Your Love Grow Tall’ is a piano-driven affair that fits right in with something you’d have heard from Keane a few years ago (if the piano was hidden in a computer), and ‘Eyes as Candles‘ has a decided retro feel that I can’t quite identify. This other side to Passion Pit is decidedly different in tone, but every bit as heart-felt, when compared to their Bigger Songs (and by that I don’t mean popularity, but more abstractly in terms of the sound).

As I type this, I feel like all my comparisons are failing to really capture the sound of Passion Pit. Maybe that’s by design, more than anything. I just lack the vocabulary of artists, which is OK. It’s new, refreshing, and worth your time. How about this: the track that best sums up Manners for me is called ‘Moth’s Wings‘

So that rounds it out for now. If this handful of songs I have stuck in my head don’t get out soon, they might explode into a blog post, but other than that, this is it as far as Music From Boston goes. Beantown has been good to me on the musical front, and for that much, I am thankful!