-Editors new record dropped Monday, but Hastings doesn’t have it. F.
-After repeated attempts, Windows Vista refuses to install on my computer
-A cautionary tale: Intel’s Socket 775 Stock Cooler is a piece of shit. It is incapable of doing anything resembling a decent job at cooling the quad core processor that I had burning away in there. It was idling at 65 degrees, Celsius, which is bad news bears. I got a little adapter so that my super-fan from the old case could find a home in the new one, and now the processor only gets up to 65C under full load. Wee.
-I got my schedule put together for next semester: 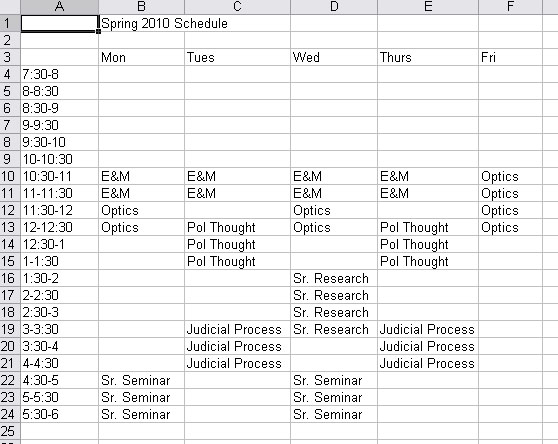 Sorry to phone this one in. I was really banking on getting to rave about the new CD or Vista, but despite my best efforts, neither materialized.