I’m still not 100% sure how I feel about this. All I know is that I was completely stoked to hear the new Shout Out Louds album, the follow up to what is at the moment my Favorite Album of All Time, Our Ill Wills, and it took me more than I month to sit down and write about it. I’ve only listened through it about 9 or 10 times, at that. Its astounding how underwhelmed I was by the whole thing.

And part of me expected it. How could it possibly exceed my expectations when I was holding it to such an impossible standard?! So I’ll take some of the blame, but I don’t think it’s all me. A good analogy would be to take a peak at the cover of the album, displayed at left; below are smaller images of their other two records: 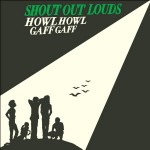 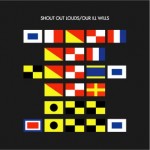 The new cover is in monotone, showing a group of real people. The older record covers used deep but vibrant colors, the first showing animated silhouettes and the second spelling out its artist and title in the abstract language of international maritime flag signals. The first two look fun. The new one looks boring…

Is it bad to say that’s essentially how the music shakes down too? It pains me to speak anything but praise for a band that’s played such a formative role on my musical consciousness, but I have to tell it like it is: this album is not exciting in a few places. Let’s start at the beginning though: the teaser single, ‘Walls‘.

This song is a great builder! It starts of slow, but confident, eventually rising to the frantic “To get to know your self you’ve got to run away / never trust any one / so run away / run run run run run run!” The song has great lyrics, a compelling and exciting melody, and it keeps things going right through the conclusion. And then the track that follows it, ‘Candle Burned Out’, sounds exactly like the titled implies. It’s a slow, lengthy, meek virtually emotionless venture; the whisp of smoke following an extinguished flame. That’s perhaps the sharpest contrast.

The opening set of ‘1999’ and ‘Fall Hard’ are solid, however. In particular, the former touches on the type of energy that we’ve come to expect from the SOLs. Problem being, that pace just isn’t sustained throughout. Lethargy runs rampant, in spire of the technical craft and expertise that went into making the record. The result is an album I’d be happy to hear in an elevator, a dentist’s office, or have going in the background, but something I hardly ever que up intentionally. Which is sad.

Towards the end, some effort is made to reclaim the album with ‘Show Me Something New’, but even this faster number is itself nothing new. The whole affair collapses in on itself with ‘Too Late, Too Slow.’ I couldn’t have said it better myself, at least with respect to the latter. The whole damn thing is just TOO SLOW. Granted, they’re artists, and have the right to make the music they want to make. That said, I didn’t see any risks here. Very little pushed the envelope. Even the best tracks would have been marginal in comparison with the earlier works. A friend of mine and I were talking the record over, with his ultimate conclusion being that whereas the SOLs usually have a smattering of great songs with a filler track here and there to hold it together, Work ended up being an album filled with… filler. Not bad, just not exciting.

I’ve listened to ‘Tonight, I Have to Leave It’ more times on its own than I have if you summed the number of times I’ve listened to each track off of Work. I expect it to remain that way. In spite of my feelings on their present effort, I still have the faith that the Shout Out Louds have a lot more to give, and my excitement for what’s to come remains by and large undiminished.