It’s been a long, long time since I posted, which gives rise to this terrible complex wherein the longer I wait, the worse I feel, and the less I want to post. Having completed my move, and begun school (more or less) though, I’m out of excuses.

Part of the reason I felt bad posting this was because by no means is news or commentary on The Suburbs something unknown to the internet at this point. I was also so incredibly excited about the record that I didn’t want the review to be clouded by the giddiness of the initial release.

No chance of that happening now, though. In any case, it’s so true that it bears repeating for the nth time that The Suburbs is a fantastic piece of music, hands down one of the year’s best, and the first album I’ve heard in a long while that really demands to be listened to. There are three main aspects I want to focus on, the first of which, and a favorite of mine, is thematic structure, next is stand-out tracks, and the final one is the ‘We Used To Wait’ video.

If you’ve read pretty much any other album review of mine, a thing I harp on again and again is that the ordering of songs have some type of logic, some rhyme or reason to it. In an increasingly iTunes-99-cent-single-driven musicscape, the art of crafting a sequence of tracks is often paid only lip service, or forgone entirely. Bless Arcade Fire for providing such an explosive counterexample. The Suburbs is composed of 16 songs, divided into roughly two equal halves (credit: this idea came from Stuyvesant Parker’s staires! entry).

Though subtly different in scope and tone, both sections contain a surprisingly overt quantity of references to the album’s main themes (wasted time that isn’t a waste, driving in the suburbs, nostalgia for one’s childhood home, journeying into the night, etc.). By no means is the above list exhaustive, and a little time scanning the lyrics quickly lays bare how definite the connections between songs are, but it’s a decent sketch.

A perfect example is that the line

In the suburbs I, I learned to drive
And you told me we’d never survive
Grab your mother’s keys, we’re leaving!

from the title track appears, almost verbatim, in ‘Suburban War‘, the emotional conclusion to the first segment of the album:

Immediately before that line, you hear the lyric

Living in the shadows of your song

which is repeated later in the album’s definitive climax, ‘We Used to Wait.’ This technique, which is dangerously simple, was executed so perfectly that it unifies the record to an extent only seen in the likes of Cloud Cult, Neutral Milk Hotel, and the Decemberists. The difference here is that those were true concept albums, whereas this… is something else.

As far as stand-out tracks go, ‘The Suburbs’ and ‘Ready to Start’ are a jolting rush to get things started. ‘City With No Children’ for some reason sounds slightly different from the rest of the set, which makes it particularly memorable, and ‘Suburban War’ as mentioned above is also quite powerful.

From the second half, I’m not a huge ‘Month of May’ fan, and the slow pace of the two tracks that follow it makes ‘We Used to Wait’ just that more more powerful. The paired ‘Sprawl I/II’ songs give you (I) a chance to catch your breath (it’s also maybe the saddest track on the album, resembling some manner of a funeral dirge, no pun implied), and (II) the opportunity to lose it all over again, ten-fold.

‘Mountains Beyond Mountains’, (whose title was taken from that of Tracy Kidder’s book about Dr. Paul Farmer’s work in Haiti) is a landmark work for the band. The unfettered synth coupled with Regine’s best vocal performance to date, along with some of the album’s best lyrics makes for a knockout in the record’s 11th hour.

Perhaps my biggest, and really only, disappointment was the reprise of ‘The Suburbs’. At 1:28, it barely counts as a song, and doesn’t really add anything to either its source or the album in its entirety. It’s a huge buzz-kill after ‘Mountains’, but perhaps that’s by design. A record so intrinsically melancholy would be remiss to leave you feeling so optimistic…

The final point in what has blossomed into a huge entry concerns both the track and video for ‘We Used to Wait‘. I have no hesitation whatsoever in categorically stating that this the best song on the album. Nothing else captures the urgency, frustration, and perceived tragedy of adolescence so clearly as this song does. It’s five minutes of everything I ever wanted from Arcade Fire, and when fully embellished by the rest of the record, is a force to be reckoned with.

We Used To Wait - Arcade Fire

On top of that, the band has worked together with filmmaker Chris Milk to create a highly inventive use of music and the web in the ‘We Used to Wait’ music video, located at TheWildernessDowntown.com. 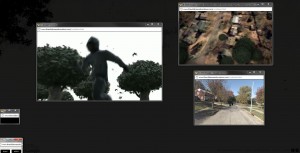 It begins simply enough, with images roughly congruent with what you’d expect, given the content of the song. Where it gets really crazy is when the application begins to lay the video’s images over photographs, courtesy of Google Maps, of where you used to live as a child. The effect is touching and eerie, nostalgic and chilling. There’s also an interactive portion, where the video asks you to write a postcard to your younger self!

The whole thing works really well (best viewed in Google Chrome, much as I’d like not to admit that), and I want to applaud everyone involved for pushing the envelope.

This recent effort is Arcade Fire hitting their stride like never before. Undoubtedly, people will continue to trumpet Funeral as the Once and Future King of all AF albums, but The Suburbs is the strongest evidence to the contrary one could ask for.