I’ve been excited for this record since ‘Shell Games’ debuted back in December, and between the 8+ listens of the album logged by iTunes and more than a handful on the NPR stream, I feel like I’ve had time to soak up most of what it has to offer.

It always sits a little funny with me when the pre-release material ends up being my favorite on the album, and I can’t really dodge it: ‘Shell Games’ is still by far my favorite track on this album. That said, The People’s Key has a lot to offer. Like Lifted, I’m Wide Awake…, and Cassadaga, the album opens with a bit of spoken dialogue, or so you think. Whereas the previously cited albums contain a sentence or two, Key’s ‘Firewall’ opens with what are labeled ‘Shamanic Vocals’ (thanks, Denny Brewer!) that go on for nearly two and a half minutes.

The content of these Shamanic Vocals sets the tone for the album, and they themselves act as a framing device, which really helps weave a tight narrative across the 10 tracks of the album. So tight, in fact, that few of the songs work especially well when displaced from the record; ‘Shell Games’ and ‘Jejune Stars‘ being notable exceptions.

The shredding guitar on this song, along with a really present bass line provide wonderful sonic scenery for Oberst’s vocals, which are a little less forlorn than you may be used to. The bridge (or whatever is happening at 2:52) is my favorite part.

‘Haile Selassie’ was also a pre-release track, but for some reason the tempo on this song kinda works against it for me, and it’s certainly listenable, but not my favorite point on the album.

A song that really grew on me over the course of listening to the record was the track that that give’s the record it’s namesake. ‘A Machine Spiritual (In The People’s Key)‘ has some really elegant textures to it, and is where I’d mark the lyrical apex of the entire effort. For some reason the lines,

seemed really insightful. The threading of so many different tempos and musical ideas into one song really impressed me, and for better or worse, this song, along with ‘Triple Spiral’, a fun song in its own right which follows it, are the ones that get stuck in my head the most.

A Machine Spiritual (In The People's Key) - Bright Eyes

‘Beginner’s Mind’ signals the beginning of the end, helping wind down the excitement of the record without making it dull or boring. It’s also got the line,

which is as intriguing of a lyric as it is morbid of an idea.

To close the record, ‘One For You, One For Me’ is also lyrically of note, along with its understated but masterful guitar riffs and another Hitler reference (which is in addition to handful in Brewer’s dialogues as well, come to think of it). Ultimately things conclude in a bittersweet fashion, a fitting end for what is in all likelihood the final Bright Eyes record. The ending of Brewer’s last spoken segment, breaking the fourth wall by the revelation of his conversation partner, is eerily insightful.

The People’s Key is a strong, thoughtful, exciting record that is best enjoyed in a quiet setting with few distractions. Oberst and crew creatively play with the medium while still offering a continuing refinement of their style, all of which adds up for one of the most notable records of this year.

An Aside: I got the deluxe packaging by an accident of wherever I happened to have bought the record, and I was really impressed with how slick it looks: 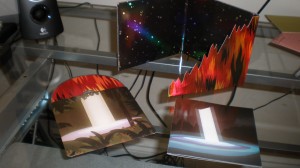