So I took a little Easter vacation, both from school and from the blog, and while I was doing that, I saw the greatest musical pairing of my entire life.

The National, my favorite band circa 2008-2010, and the Arcade Fire, who had my favorite release of 2010 and the most intimidating back-catalog in all of indie music, played in my hometown of Kansas City, MO on April 20th.

Somehow, “amazing” doesn’t quite cut it. First, the track list:

When I was gearing up for this show, I checked out what they played only a few days prior at Coachella (it was more or less the above), and rolled my eyes when I saw ‘Abel’ and ‘Mr. November’. Not that I don’t like those songs, I just didn’t like them enough to need to still hear them live, given how long ago they were released.

What a fool I was. These guys know exactly what they’re doing. The screamy songs from their earlier records actually sound better than the recorded versions because of Matt Berninger’s erratic, spontaneous live performance, and have earned their long stays in the group’s live repertoire.

Slower tracks like ‘Slow Show’ are suddenly given new life on stage, carrying an energy that surprised me, and really suited the material well.

I was glad to hear ‘Fake Empire’ and ‘Terrible Love’ late in the set, as they’re probably my two favorites, despite not being particularly deep cuts. I was most surprised to hear ‘Squalor Victoria’ which is a cornerstone (for me) of 2007’s Boxer, and ‘Conversation 16’ which is a (utterly fantastic) song about zombies, as near as I can figure.

About Today (Live at Bonaroo) - The National

To close the set, the group played ‘About Today‘ from their Cherry Tree EP, which I don’t think I’d heard before, though I think it is a regular closer for the band. They dedicated it to TV On The Radio’s Gerard Smith, who had died earlier that morning from a battle with cancer. It was a really kind gesture, and the song was poignant and emotive to match.

It was unfortunate that they didn’t get an encore, but I feel like that’s a faux pas as an opening act.

[Additional Songs I’d Have Liked To Have Heard:
Secret Meeting, All The Wine, Ada, Start A War (got played two days later at the Chicago set, with Win Butler doing the backup vocals!), You’ve Done It Again Virginia, Sorrow]

And now for the main act… 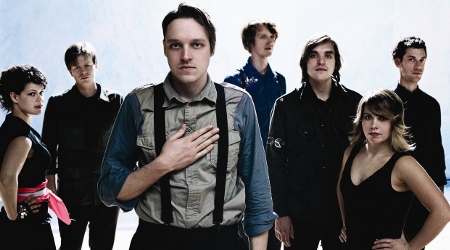 Where to begin… at the start, I suppose? There is a kitschy video into with ’70s movies advertisement bumpers, complete with clips from the seminal(…?) cult-classic The Warriors. “Can you dig it?!?!?!” he asks; you bet.

‘Month of May’ is a song that I didn’t fully appreciate until I saw what explosive energy it has as a set-opener. Or maybe I’m just in a fuzzy-guitar phase, who knows, but it was a good starting point nonetheless. On the whole, the set list was appreciably different from AF’s Coachella set.

The composition of the set (The Suburbs-7, Neon Bible-3, Funeral-7) was interesting. The prevalence of the new material made sense, but three Neon Bible songs to Funeral‘s seven seemed a little stacked; then again, it is Funeral… Not a complaint really, because I got to hear ‘Intervention‘ which fixes pretty much anything, but I would have given up a few of the slower Funeral tracks to hear ‘Windowsill’ or ‘The Well and the Lighthouse’.

Arcade Fire has a few tricks up their sleeve for their live set: extended cuts of ‘Ready to Start’ and ‘N. #3 (Power Out)’, as well as the coupling of ‘The Suburbs’ with its Reprise, not to mention a really engaging visual presentation through both video and lighting all work to make this set far greater than simply the sum of its parts.

Remember the postcard thing at the end of http://www.thewildernessdowntown.com/? They really did end up as the video overlay for ‘We Used To Wait’, which was awesome, having spent some time playing with that site last summer.

Getting the full quartet of the ‘Neighborhood’ tracks in one set was kinda cool, even if I don’t care for #4 as much as the rest.

‘Wake Up’ was the final song of the main set, which everyone seemed to be expecting. As much as I love that tune, I don’t like it as much as everyone else. It’s big and anthem-y, and that’s great, because it’s really cool when everyone sings along with it, but I don’t quite understand how it became the quintessential AF song.

And a two-song encore? I wanted three! But at that point, I was just starting to get sad that it was ending.

The two they saved were the huge, explosive, melt-your-face ‘N. #2 (Power Out)’, and the song that I think deserves to unseat ‘Wake Up’ as the go-to Arcade Fire anthem, ‘Sprawl II (Mountains Beyond Mountains)’. Both songs had the energy of a sprint-to-the-finish that left the audience breathless by the end, and it was a great way to complete the night.

It was a tremendous opportunity to see this ensemble work their craft, especially because no single member ever fell into the background. A special thanks goes to Will Butler, who ran around the stage like a crazy man, which I enjoyed immensely.

[Additional Songs I’d Have Liked To Have Heard:
Crown of Love, The Well and the Lighthouse, (Antichrist Television Blues), Windowsill, City With No Children (also got played at the Chicago set), Modern Man, Suburban War]

Few! Sorry for so long of a recap. It was a hell of a show, to have your two favorite groups playing at an awesome venue in your hometown, back-to-back. I couldn’t have asked for anything more.