Another Christmas, come and gone. Every year, it sneaks up on me quicker and quicker. Remember as a kid, the month of December was far and away the longest? Every day an agony, keeping you from your presents seemingly out of spite?

As a kid, I guess it never bothered me much, but in more recent years I’ve had a little residual guilt about being so excited about presents. You know, figuring that maybe I’m some sort of materialistic jerk who only cares about having things for himself? I worry a lot about these things, and not about what people will think, so much as what I am, in some strange objective sense of comparison.

I help to assuage such a guilty conscience by putting a lot of thought into giving other people A) Things they actually want, or B) Something that’ll at least make them laugh. If you can make them laugh of smile, it means you know them well enough to be a little clever, and if you know them well enough for that, maybe… just maybe, they doing think you’re some sort of Materialistic Jerk who only cares about having things for himself.

That’s how me and my neuroses get through the holidays.

Not It’s time for the gift list! I do this ever year less for you and more for me, becuase it would be depressing if I couldn’t tell you exactly what I got for Christmas in, say, The Year 2005. Please note the single overlap gift between 2005 and 2008: the Chili’s Gift Card. If that doesn’t say something interesting about me, I don’t know what will.

New Keyboard-
The thing is so, so beautiful. Plus it lights up, and who doesn’t love visual stimuli.
I even took a picture. 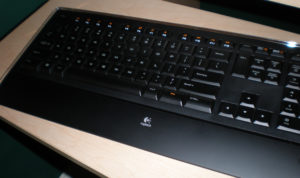 External Hard Drive-
500GB of extra space to store my overabundance of saved webcomics, pornography, and lol-cats.
(I wonder if sometimes I should joke less about pornography. Like maybe people will start to think I’m some type of pervert. Then I remember that most people, in spite of what they say, are at least a tad perverted. It’s a symptom of the human condition. Recalling that, I worry less. For the record, I feel I’m a pretty normal-caliber pervert.)

LEGO Star Wars Tank-
The thing has a Zero-Point turning radius. I’d say the only thing it’s missing is 25″ spinners… but everyone knows you can’t put a spinner some something that’s powered by repulsor-lifts. Sheesh. P.S.: IT’S A TANK!.

If I forgot something, oh well. Jeez I get to much junk. Thing is, I’m going to put it all to good use, so it’s hard to feel too awful.

The next day, after Christmas, I had to go to work. At 7 AM, a time I’ve not seen in many, many weeks (Even at NURO, I was usually asleep by then!), I drove down to the ol’ Foxhill Tower Cleaners. On my way there, I listened to today’s song. Not becuase I was thinking about Ben Folds, or abortions, or anything, but becuase he uses the line, “It’s 6 AM, day after Christmas…” And I thought it was kinda cool that I got up at 6 AM, on the day after Christmas. Plus, Brick makes for great mopey-morning music.

Going back to Tower, particularly my alma matter branch, Foxhill, is always weird. That place is like a time machine. As soon as I walk in, it’s the winter of 2004. The place is freezing, becuase we have no central heat. Business is slow, like always. I brought a battery of distractions that work only for a little while before I realize how uncomfortable every chair in the store is. I eventually settle for taking a nap on the floor. There are worse places to work, I think, unable to sleep, but laying on the floor nonetheless.

Blog before the new year? Probably not a normal one, but I will have the Musical Year in Review done by 2009.