Catching Up On the Editors

Besides sampling a bunch of tracks of the inter-web this summer, I also make an effort to go deeper into some of my favorite artist’s catalogs. It’s always great when I can get on board only one or two records behind, and get ‘caught up’. I call this ‘backlogging’ for whatever reason. One such record I picked up to accomplish that was The Back Room by The Editors. Now, if you’ve heard my radio program (which is more or less current, FINALLY), you know that I started to get into a major Editors phase last semester.

Me and that band are my patented Pandora Success story. I heard ‘Smokers Outside a Hospital Door‘ on my station one day, and I clicked the thumbs up. A few weeks later, it popped up again, and I liked enough to *cough**cough* listen to the entire album. I was pretty taken with it, and it became a staple of my Spring roster. I felt stupid for having overlooked it last near, thus earning it the title “Best Missed Album from 2008”, with Fleet Foxes also ranking highly up there.

Smokers Outside The Hospital Doors - Editors

So I listened the pants off of it, and really enjoyed it. The Joy Division-esque veil of dark and brooding is probably one of my favorite musical gimmicks (see: Interpol, and the National on most days), and the Editors have that in spades. Sure, maybe it’s a little derivative, but Joy Division didn’t exactly churn out a very hefty library, and so I don’t mind somebody else trying to pick up the torch.

That being the history of me and this group, lets talk for a second about The Back Room. Honestly? I had a bit of a hard time warming up to it. There is one song I really liked, even from the beginning, ‘All Sparks‘, and a few others (‘Blood‘, ‘Fingers In The Factories’) that I was warm to, but it took some time to come out and say “I really like this record!” In the few short days we’ve spent together, we’ve made good strides… 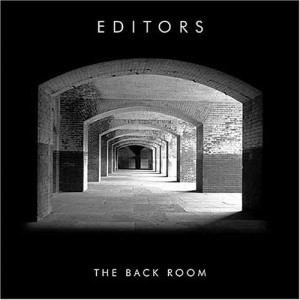 Which I guess brings up an important point: I hate basically everything the first time I listen to it. Sometimes there’s a song that’ll just grab you on the radio (‘When You Were Young’, ‘Starlight’, ‘Amsterdam’ (Guster), and so on…) but besides that I take a good five listens to like something. I kid you not, I didn’t even start to like Transatlanticism until 10 listens and two months of time. I think is OK, you know? It’s like how you have to build a friendship; you don’t just meet a person and decide to be best mates until the end of the world. That kinda thing takes time.

Anyway. I still think their sophomore album, An End Has A Start is better than their debut, but either way you turn it, the Editors are worth looking into. To really send this home, I decided to throw in a fourth track, off of An End…, ‘Escape the Nest‘. Also, if you like what you hear, keep your eye out for their newest record that lands September 21 called In This Light & On This Evening. I’ll post samples of that when I have them myself, but until then, enjoy!

[NOTE: Two things-
I’d just like to say I’m officially on the board: I like neither of these closers, so take that, Ian!
And do I post too many tracks? I feel like giving people options is nice, but I’m not sure.]

The Back Room – Editors
An End Has A Start – Editors